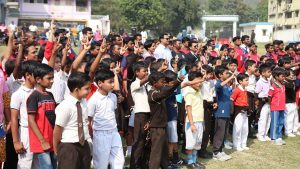 Jamshedpur FC yesterday, November 22 concluded the Grassroots Leaders’ workshop. The workshop, which was an open session for anyone above the age of 18 was conducted between November 19 – 22.

The last day of the workshop was held at RVS Academy was integrated with a Grassroots festival saw more than 150 kids from the school from ages 3 to 12 took part in the last day of football festival.

“The kids have thoroughly enjoyed playing and learning from one of the best clubs in India. We look forward to host many more grassroots festivals like these in future,” Mitali Roy, Principal RVS School.

Having concluded the festival, the certificates were handed to the participants by the dignitaries.

Kundan Chandra, the Head of Grassroots & Youth Development, Jamshedpur FC shared his thoughts about the workshop and said, “Coaching kids is never an easy job and workshops like these help the coaches better and understand kids behavior and train them the right way.”