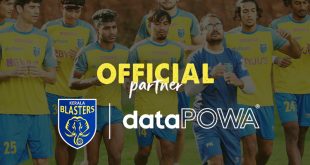 26 year old Goa-born Albino Giovanni Gomes played for the Salgaocar youth teams before becoming a part of the Green Brigades senior team in the 2013 season.

After two years with the Goan giants, in 2015 he was signed in the draft by Mumbai City FC for ISL-2 on loan and he returned for ISL-3 with the Blues.

Albino went on loan to Aizawl FC to lift the 2016/17 I-League campaign. Thereafter he signed for Delhi Dynamos and spend two seasons with them before moving with the whole club to Odisha FC.

Albino, who was part of the 2014 Lusofonia Games goal winning Goa-India squad and has been in the India Under-23 squad.

Albino Gomes said, “I am extremely happy to join Kerala Blasters for the upcoming ISL season and look forward to playing in front of the most passionate fans. The club has a beautiful vision and I feel I’m at the right place. Can’t wait to join my teammates and start prepping for the season.”

Kerala Blasters sporting director Karolis Skinkys said, “I would like to congratulate Albino on signing for the club. I trust his capabilities – both physical and mental strength and believe he is now ready to showcase his talents to become an important part of our team. I hope to see him be confident and give his maximum from day one. Wishing him the best years ahead.”