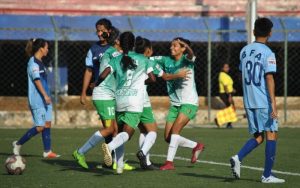 Kickstart FC’s Mona scored the solitary goal of the game in the 68th minute.

The first half was quite evenly contested with Kickstart FC coming close in the 33rd minute when Kavya weaved her way down the middle and had a fine attempt on goal. It was matched by Baroda Football Academy keeper Afshan Ashiq with a fine save.

It was Kavya again in the mix just seconds before half-time, and with some fine footwork she found her teammate Renu, who had a crack from close range but Ashiq pulled off another magnificent save to keep the scores level, heading into the break.

The deadlock was broken in the 68th minute, when a looping delivery from Kavya deceived everyone, including the keeper. The trajectory of the cross suggested that it was goal-bound anyway, but Mona was lurking at the far post and for further insurance, tapped it into an empty net to put Kickstart FC in front.

Some fine defensive solidarity ensured that the Karnataka outfit held on for the three points.