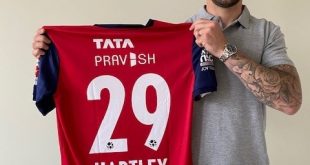 Two-time Indian Super League champions Chennaiyin FC in association with their Official Workspace Partner, Workafella, conducted the Workafella – Chennaiyin FC Futsal 2020 tournament in the city over the weekend of February 1-2, 2020. Workafella is a leading co-working space provider in the country. With Workafella being Chennaiyin FC’s engine room, the centre also doubles up as a perfect venue for all of the club’s off-field activities.

“Congratulations to our winners and all the participants of the Futsal 2020 tournament. We strongly believe in holistic development of our employees and constantly strive to organize events such as Futsal 2020 that aid our customers in enriching their employees’ lives,” said, Shray Rathha, Director, Workafella. “What was interesting to see was that the tournament also served as an opportunity for our members to network with one another between all our centers. We aimed at hosting a stress-buster activity for our community and help members stretch their muscles and give football fanatics of the Workafella community a reason to enjoy, network and unwind,” added Mr. Shray.

Futsal 2020 featured six teams, one from each of Workafella’s six centers in the city. The tournament saw the teams divided into two groups that played three matches each. The top two from each group went on to play the knockout round, comprising of both semifinal and final matches. Finally, the Workafella Perungudi team after an exhilarating day on the Astroturf got an opportunity to rub shoulders and spend some time with one of India’s finest young footballers in Lallianzuala Chhangte.