Leon does the trick as Bengaluru FC Reserves rout MEG in 6-1 result! 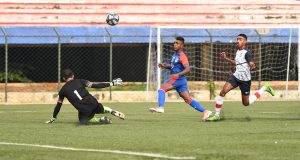 Bengaluru FC Reserves put on an impressive show at the Bangalore Football Stadium, as they hammered MEG 6-1 for their biggest win of the season, in a Round-6 clash of the BDFA Super Division League on Friday. Leon Augustine netted a fine treble (35′,38′,57′) for the Blue Colts as Ajay Chhetri (45+2′), Naorem Roshan Singh (82′) and Edmund Lalrindika (89′) joining him on the scoresheet. Shaik Muzeeb (50′) scored the lone goal for MEG in this lopsided affair.

The big win meant the Blue Colts took their tally to ten goals in the last two games, following their 4-0 win over South United on Monday, moving ahead of MEG and into fifth place on the table, with 13 points from six games.

Up against the Servicemen, Coach Moosa made three changes to the squad as Muhammed Rafi, Suresh Wangjam and Edmund Lalrindika returned to the starting line-up.

With both sides failing to take control of the game, it took more than half an hour for the first real chance of the half, and it came as the Blue Colts took the lead in the 35th minute. A quick attack from the left flank saw Edmund get the ball in the middle of the park, and the striker slid in a neat through ball to Leon who made a run in from the right before controlling and chipping it over an advanced Sarath Narayanan in the MEG goal to break the deadlock.

Three minutes later, MEG almost pulled level when Imnaakum’s free-kick from the left flank found Abdul Jiyad whose header beat Aditya Patra, but came off the crossbar. While MEG continued to push ahead, it was the Blue Colts who scored and doubled their advantage at the other end in the 41st minute. Having earned a corner on the right, the Blue Colts caught MEG unawares, as Edmund played it short to Ajay who then whipped in a cross at the near post to find Leon. The winger timed his jump perfectly and glanced his header past Narayanan to make it 2-0.

Ajay got his name on the scoresheet to make it 3-0 just moments later, when he picked up the ball in midfield and dribbled past a couple of defenders before firing it home from over 25 yards out.

MEG smelled a resurgence early in the second half when they pulled one back in the 50th minute. Patra did well to palm a powerful long ranger from Nitin onto the crossbar, but the rebound fell for Shaik Muzeeb who tapped home to make it 3-1.

Moosa’s boys then netted again at the other end to regain their three-goal advantage. Ajay managed to run into the box on the left before cutting the ball back into a dangerous area. With MEG failing to clear their lines, Leon capitalized on the opportunity, to score from close range and complete his hat-trick.

A fifth goal would then come in the 82nd minute when Leon turned provider, running past his marker on the right and slid a low cross into the box for Roshan, who slotted home. A minute from regulation time, Edmund added a sixth to the sheet, picking up pass from Suresh on the counter before poking home past a hapless Narayanan in the MEG goal.

Keeping up with tradition, Bengaluru Football Club came together to celebrate and look back at …