Name of 1995 Copa del Rey winners on away kit of Deportivo La Coruna! 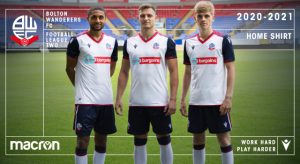 English League Two side Bolton Wanderers founded in 1874 and Macron, leader in the international teamwear sector, have announced that the Macron Hero logo will be on the shirts of “The Trotters” for the next six seasons.

The Wanderers, known as this due to the difficulties initially faced in finding a permanent home – when for a time players had to trudge back and forward for a time between the pitch and a nearby farm to retrieve balls kicked off the field of play – boast 4 English Cups and a Charity Shield in their trophy cabinet. The partnership between Macron and Bolton Wanderers is one which is starting up again after a brief pause.

“English football is a ‘second home’ for Macron. Many top clubs have chosen to partner with us as technical partner and it is important to count Bolton Wanderers among them. We are about to start off again on a new journey together to develop a renewed partnership,” said Gianluca Pavanello, CEO of Macron. “We know the history of the club and the fans very well and we are convinced that we can develop a unique collection dedicated to the players and fans alike.”

The agreement between Macron and Bolton Wanderers will see the production of a new line of products for the club to wear starting from this coming 2020/21 season.