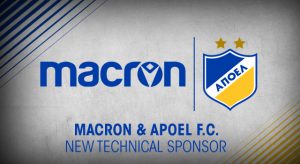 Macron and APOEL FC, the Cypriot Champions, have signed a contract which, beginning with the 2019/20 season, will create a partnership between Italian brand and the Nicosia based team that has triumphed in the Cypriot championship for seven consecutive years.

The complete name of the club APOEL is Athlitikos Podosfairikos Omilos Ellinon Lefkosias. Founded in 1926, it currently holds the highest number of titles on the island of Cyprus. Its hours include: 28 national titles, 21 Cyprus Cups, 13 Lega Supercups and several participations in European competitions with highlight the presence in the Quarterfinals of UCL and phase of ’16’ of UEFA Europa League.

Currently sitting at the helm of APOEL FC is the Italian Paolo Tramezzani. Coincidently he has worked at other Macron teams: assistant manager for Albania, and later head coach for FC Sion in Switzerland.

Previous FAO announce their Odisha Sub-Junior State Girl’s squad!
Next Chandigarh Youth League: Semifinals played in U-8, U-10 & U-12 categories!