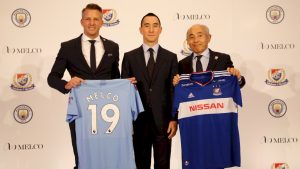 The partnership was launched at an event in Yokohama attended by City legend, Paul Dickov, and members of the Yokohama F. Marinos first team.

Through this partnership, Melco will also become the Community Presenting Partner of Yokohama F. Marinos to create and implement community programmes and events around the world.

“Melco and Manchester City share a common approach to have entertainment at the heart of everything we do, providing great experiences for our fans and visitors.”

“We are also both committed to using football as a force for good and are excited for the launch of Melco’s new community football programme in Japan.”

Lawrence Ho, Chairman and CEO of Melco, said, “Building successful teams and successful partnerships have a lot in common. At Melco, we look for shared ambition and 21st century values.”

“And in Manchester City and Marinos we have found perfect partners – businesses that excel at entertaining, whilst putting community first.”

“Melco’s connections to Japan run deep, so being able to support grassroots community programmes across the country is an exciting opportunity for us all.”