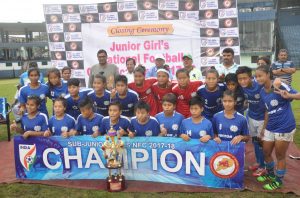 Manipur seemed to be crusing to a win after Th. Christina Devi (22nd) and A. Roja Devi (41st) had given them a comfortable 2-0 lead, but a M. Thahenbi Devi own goal in the 43rd minute just before half time allowed Odisha back into the game as Manipur took a 2-1 lead into the break.

The second session saw a forced break due to heavy monsoon rains and thereafter Manipur continued their domination but they didn’t score any more goals and it was Suman Prgyan Mohapatra who equalised in the 79th minute.

However Manipur sealed the match and the title in the first minute of injury time when A. Roja Devi scored her second goal of the day. Thereafter the referee blew the final whistle as Manipur won 3-2 to defend their Junior Girls National Football Championship title.