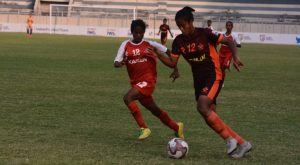 It was billed as a clash of two heavyweights, but in actuality, it turned out to be quite the opposite, as Gokulam Kerala FC demolished Rising Students Club 5-0 at the Guru Nanak Stadium in Ludhiana, on Sunday, May 5.

Manisha scored a hattrick to power Gokulam Kerala FC through, while her India international teammate Sanju stole the show with a Player of the match performance.

It was Gokulam Kerala FC all the way, and the side from Kerala got off the blocks early on and took the lead on the 12th minute itself, when Dalima played it in to Sanju, who calmly put it in the back of the net.

Just seven minutes later, Manisha powered her way into the Rising Students Club box while being constantly under challenge from a defender, and fires it past the keeper into the goal.

About another 10 minutes later, Gokulam Kerala FC netted a third, and it was yet another India international, Anju Tamang who scored this time. She ran on to a ball from Ranjana smashed it into the net.

A tactical switch by Gokulam Kerala FC coach Priya PV in the second half, sent Manisha into the overdrive mode. Manisha swapped position with Anju, with the former playing up top, and the latter playing in the hole.

This worked wonders for them, as Manisha soon showed her class. It took her some time, but on the 72nd minute, the local girl dropped her shoulders, sold a dummy, and powered a left-footer into the back of the Rising Students Club net.

Soon after, Manisha showed her presence of mind yet again, as she pounced on a rebound and slotted it past Rising Students Club keeper Rani Bhowmick. The writing was on the wall, as Gokulam Kerala FC cruised to the final whistle from then on.