Mbappe world’s most valuable U-21 player for second year! 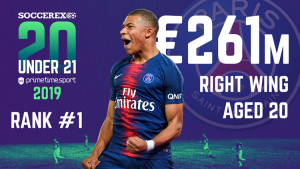 Paris Saint-Germain and France forward, Kylian Mbappé is the most valuable under 21 player in world football according to the Soccerex 20 U21 Report. The French superstar tops the rankings for a second successive year with a valuation of £234.8m (€261.6m) according to the 5th edition of the Soccerex report, compiled in partnership with Prime Time Sport.

Mbappé’s valuation is more than twice that of second placed player, Borussia Dortmund & England winger Jadon Sancho who is valued at £108m (€120.3m) and more than three times Ajax and Holland defender Matthijs de Ligt, who is ranked third with a valuation of £66.9m (€74.5m).

Jadon Sancho is the most valuable of six English players in the list making England the dominant nation in the rankings. Sancho’s valuation is the result of his breakthrough season at Dortmund where, as a regular starter, he was one of the most exciting and prolific chance-creators in European football at just 19 years of age. He is the first of an exciting crop of talent that helped England win the FIFA U17 and U20 World Cups to make the breakthrough and he ended the season playing for England in the inaugural UEFA Nations League finals.

Sancho’s move to Dortmund appeared a gamble at the time but it has paid off spectacularly, with both the player and club benefitting hugely from Dortmund’s commitment to youth. This has led to other Bundesliga clubs targeting young English talent and other English players eyeing similar moves abroad – most notably Bayern Munich’s pursuit of Sancho’s U17 team mate and fellow Londoner Calum Hudson Odoi, who only made a handful of league appearances for Chelsea during the 2018/19 season and as a result is only 20th in our list with a valuation of £28.4m (€31.7m).

France is the second most represented nation with four players, then Brazil with three, Italy with two and then one each for Portugal, Netherlands, USA, Germany and Nigeria.

For the first time there are no Spanish players but LaLiga can now boast five of the top 20, following the moves of Joao Felix, Rodrygo and Eder Militao to Atletico Madrid and Real Madrid from SL Benfica, Santos and FC Porto respectively this summer.

The Premier League is the most represented league with six players – and this is excluding Christian Pulisic, whose ranking is based on his time at Borussia Dortmund. Of the other “Big Five” European leagues, the Bundesliga have four players in the report and Serie A and Ligue 1 both have two.

For the first time, there are no out-and-out strikers in our report, although Italian front men Patrick Cutrone and Moise Kean are just outside the top 20. Genuine goal scorers – so important to a team’s success – are a rare commodity and often it takes players time to make a success of or adapt to the position. It is worth noting that some of the most prolific forwards of the modern era such as Thierry Henry, Cristiano Ronaldo and Lionel Messi all started out as wingers before being converted into strikers. Mbappé is in a similar mould, having played for both club and country as the main striker, as well as out wide and, as his career develops, could well become the epitome of the new number 9.

Wingers / inside forwards make up nine of the top 20, central and attacking midfielders six, defenders four and there is one goalkeeper with Italy and AC Milan’s Gianluigi Donnarumma featuring for an unprecedented 4th successive year.

The rising value of defence

Our methodology reflects the market principle that position affects value. In each edition there have been more attacking players than defensive ones but, this year, although the number of defensive players (i.e. defenders and goalkeepers) featuring is similar to previous editions, we have a higher concentration at the top end of the report, with two in the top 5 and four in the top 10. Leading the way are Matthijs de Ligt and Trent Alexander-Arnold who, after successful UEFA Champions League campaigns, both saw their values increase by over €20m from 2018. With de Ligt young enough to feature next year, and with rumours of a big money move on the horizon, he could become the first defender to top our list.

Joao Felix – the buy out that bucks the trend

Of the top 20, four players have transferred since the start of the year and of these four, three* have moved for a fee within €5m of our valuation, highlighting the reliability of our model. The outlier is Portuguese wonderkid Joao Felix who based on data prior to 1st July we valued at €71.8m. That Atletico were willing to pay Benfica the €120m required to trigger his buyout clause reflects his undoubted talent and the willingness of Europe’s elite, fuelled by broadcast and Champions League revenues, to spend big on potential rather than his actual market value.

The youth market – stagnation or normalization?

The overall value of our top 20 has increased by 5.8% YoY and the value of the top 5 has increased 16.5%. These increases pale in comparison to last year when the overall value went up by 66% and the top 5 by a whopping 73%. In one light this reduction in the rate of growth could be appear to indicate a stagnation in the value of U21 players – particular in the context of the overall YoY growth experienced in 2017 (62%) – but, in truth, the sharp rises in 2017 and 2018 were fuelled by vast revenues from the record-breaking Premier League broadcasting rights deal that began in 2017 and the paradigm shift caused by PSG triggering Neymar’s huge buyout clause in 2018. The values in this year’s report represent more a market normalization where, without the impact of extreme external forces, values have increased at a more measured rate in line with overall market trends.

It is also worth noting that in 2018, there was a greater percentage of players featuring in the report for the final year – nine in 2018 compared with just five in 2019 – and so “peaking” in terms of their report valuation. It will be interesting to see just how much the appreciation in value of the 15 eligible to feature again next year will mitigate the loss of Kylian Mbappé, who, under our methodology having been born in 1998, will not be eligible for the 2020 report.

“Mbappé’s dominant position at the top of our ranking reflects his status as the most exciting and sought after player in world football. He looks set to remain a PSG player for the immediate future but if, as seems likely, he moves to a Spanish or English heavyweight in the years to come, our report indicates that his fee will be a record breaking one.

With 2019 being the last year Mbappé can feature, and the emergence of top English talent such Jadon Sancho, there is a good chance that next year we will see an English player heading the rankings for the first time since Dele Alli in 2017 and before that Raheem Sterling who topped our first ever report five years ago.”

FIFA is sharing a football risk assessment tool with its 211 member associations, the six …