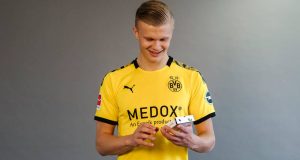 Borussia Dortmund have had good experiences with natural forces from Norway in the recent past. For the top-of-the-table clash with Bayern Munich, there will be one Norwegian force of nature wearing the number 17 and another adorning the shirts of the BVB team.

For this game, Borussia Dortmund’s main sponsor Evonik Industries is handing over its prime position on the club’s shirts to the Norwegian brand MEDOX, a natural food supplement made from wild Scandinavian blueberries. It is the first product of the Essen-based group to be marketed directly to end customers via pharmacies. It was developed in Norway, where it has been produced for 20 years.

“MEDOX is now finally available in Germany too. Football is a symbol of vitality, and so is MEDOX. So it stands to reason that we would combine the emotional pull of football with the vitality of MEDOX,” said Susanne Pluta, Director of Consumer Products at Evonik.

The deep-violet MEDOX capsules contain so-called anthocyanins. The plant dyes bind free radicals and thus protect against oxidative stress – which ensures healthy blood vessels. The extract from wild blueberries has been proven to have health-promoting benefits for the heart and blood vessels. The immune system benefits from it too, meaning the berry power in the capsule is not only suitable for athletes.

The inclusion on the jersey will be a one-off and will be complemented by numerous marketing campaigns in pharmacies, magazines and social media. The jerseys, which were produced solely for this one match against Bayern Munich, will subsequently be given away in a competition and cannot be purchased.