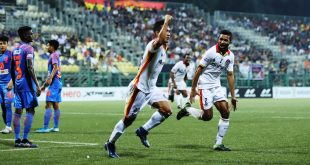 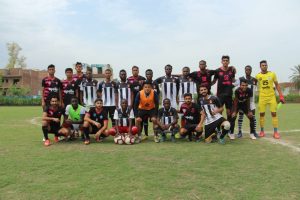 The football team from AP Goyal Shimla University had lunch at Minerva Academy and then played a friendly with the reserve team of Minerva Punjab FC.

The match between the two teams was played at the Minerva Academy ground. The match finished with 5-1 victory for Minerva Punjab Reserves.

Zacharie opened the score for Minerva with a strong header rising above the goal keeper in 29th minute. This was followed with another sublime finish from Harsh in the 34th minute to give Minerva Reserves a 2-0 lead at the half time whistle.

The second half started with domination from Minerva Punjab reserves. Krishna added the third one in the 60th minute. AP Goyal students did manage to pull one goal back with a strongly taken shot by their best player on the day, Hamkar.

Minerva reserves recovered quickly and finished the game strongly with goals from Salmaan and Amandeep in 85th and 89th minute, respectively. The game finished with a 5-1 victory for Minerva Reserves.

In the post match ceremony, both the teams exchanged a vote of thanks. Minerva Punjab FC senior team players Robert Primus, Kareem Omolaja, Kalif Alhassan, Souvik Das and Arshdeep Singh were present for the post match ceremony. Minerva Punjab FC head coach Sachin Badadhe was also present throughout the match to provide his valuable insight to both the teams.

AP Goyal Shimla University students were presented with Minerva Punjab FC jerseys as a token of appreciation and encouragement by senior team players of Minerva.

This event was another step in Minerva’s constant endeavour to promote the grassroots football in Punjab and nearby region. The AP Goyal University students were really happy to have got a chance to rub shoulders with players and coaches from Minerva Punjab FC.