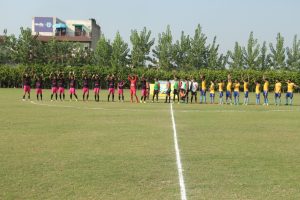 Himanshu Jangra started in the second half with Minerva Punjab FC starting to threaten the opposition with some pacy attacks from the flanks. In the 59th minute, Jangra got pulled down in the opposition box by the defender resulting in a penalty being awarded to the former champions. A very confident Jangra stood strong without any fear and slotted home the penalty.

The game then took an interesting turn as the Khalsa Warriors FC struggled to find an equalizer and thus testing Minerva Punjab FC’s defence, but in spite of a few quality chances, Minerva Punjab FC kept possession till the final whistle and eventually came out as the conquerors.

With four wins in a row, Minerva Punjab FC are through to the semifinals to be held on Friday, October 18.

Previous India U-15 Girls ride Sai Sankhae hattrick to score 10 against Bhutan!
Next Third kit of SPAL pay homage to the province of Ferrera!