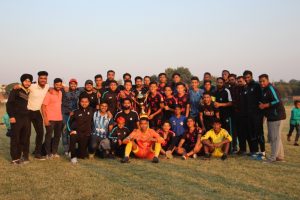 Minerva Punjab FC was crowned champions of the Amarjit Singh Memorial Cup with a 6-0 victory in the finals against Punjab University, Patiala at Singhpura, Kurali.

The tournament was played from March 15 to 17, 2019 and Minerva Punjab FC send a team which was mainly made up of players from their reserves and their Under-18 and U-15 youth teams.

Minerva Punjab FC started the campaign with a win through penalties (3-1) against Garshankar college with their U-15 goalkeeper Mustakim pulling up first two saves.

In the semifinals, Minerva Punjab FC beat Sikh National College, Banga 2-0 with a goal from Saurav Rautella and another from U-15 player Samson.