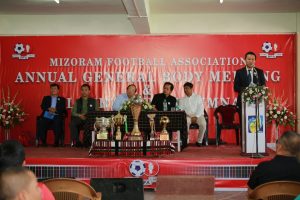 The Mizoram Football Association successfully organised its General Body Meeting of 2017 on Friday, May 26 at the R Dengthuama Hall, Mualpui. It also held a celebration for its various successes on the pitch this season.

Lal Thanzara, President of the MFA, said at the meeting, “The success that Mizoram has achieved this season in Football is down to the teamwork and dedication of the Zone, District and state FA.”

Reports were given from various district FAs and the General Body Meeting commenced with as much as 10 agendas discussed.

A grand celebration of the success of Mizoram this year followed the meeting at 2pm. Footballers past and present, past MFA leaders, leaders of other sport associations, NGO leaders, various Govt. officials and selected media personnel were all present at this celebration.

Success story of Mizoram Football during 2017