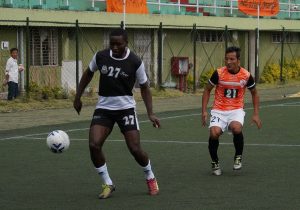 Kolkata giants Mohammedan Sporting Club entered the final of the 36th All India Sikkim Governor’s Gold Cup beating Sikkim Aakraman FC 3-1 in extra time in the second semifinal of the competition at Paljor Stadium in Sikkim on Tuesday afternoon.

This is the first time in last 25 years when the Black Panthers have made it to the finale of Sikkim’s most prestigious football competition.

Mohammedan Sporting began on an aggressive note initially with better all round footballing skills. But a few errors here and there denied them the lead in the first-half.

After change of ends, Mohammedan Sporting pulled ahead when skipper Rana Gharami slotted home a Atinder Mani cross in the 51st minute. However, their joy did not last long as Thupden Bhutia restored parity in the 64th minute for Sikkim Aakraman FC from the spot.

In the remainder of the game, both the teams wasted opportunities to take the match to the extra time where substitutes Parminder Singh (93rd) and Dipendu Biswas (107th) scored in either halves to ensure a spot in the finale for the Black Panthers.

Mohammedan Sporting will now take on Nepalese club Jhapa XI in the grand finale on Thursday, October 27 at 1.30pm.