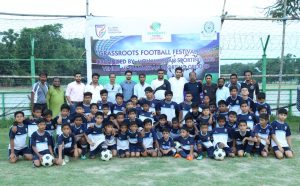 Mohammedan Sporting Club celebrated the annual AFC Grassroots Day at Mohammedan Sporting Ground in Kolkata on Saturday, May 20, focusing on getting kids in the age group of 6 to 12 years to come together to learn the basics of the game through various fun activities.

Though the AFC Grassroots Day is usually observed on May 15 every year but the date has fallen on a Monday this year therefore the club decided to celebrate it on the weekend to reach out to more kids.

As part of the event organised by the 126-year-old club, 12 club coaches trained at least 150 kids as football players after they were given an awareness session on the game to participate, exemplifying the grassroots spirit of inclusivity.

As the kids rotated through the stations, they learned new football skills including juggling, dribbling, precision passing, shots on goal and speed running.

“The aim of the event is not only bringing up good players, but at the same time to inspire children into the sport, to encourage healthy lifestyles and to develop both physical, moral and volitional qualities,” said club president Sultan Ahmed.

“Grassroots development provides a strong foundation that will allow children to progress to the top level. The foundation we build today will lead to a greater future for our historical club,” he added.

Meanwhile, Mr. Ganguli thanked Mohammedan Sporting Club for this great initiative and said this kind of events will make kids enjoy the game and at the same time help them learn basics of the game.