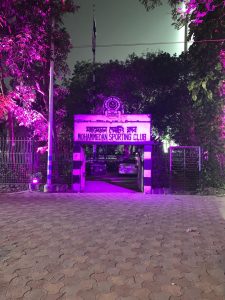 To mark the historic occasion of the first ever Day-Night Cricket Test Match on Indian soil between India and Bangladesh at the iconic Eden Gardens in Kolkata, Mohammedan Sporting Club turned pink to pay tribute to the longest format of the game on Friday, November 22 evening.

This is being done as the Test match will be played with a pink ball unlike the red ball used traditionally.

The newly elected BCCI president Sourav Ganguly is the man behind making this possible as he convinced Indian captain Virat Kohli and the Bangladesh Cricket Board to play under floodlights in a bid to pull crowds to the stadiums in the longest format of the game.

Various other city landmarks such as the Howrah Bridge, The 42, Shahid Minar, Tata Centre have all been lit up with a pink light for the special occasion.

AIFC sends proposals about Coaching roles to the AIFF!

In a letter to the AIFF (All India Football Federation), the AIFC (Association of Indian …