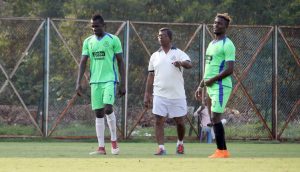 Mohammedan Sporting Club technical director Raghunath Nandy has expressed confidence that his side can beat Chhinga Veng FC tomorrow at home to keep their final round hopes alive in the Second Division League. The Preliminary Round Group C tie at Kalyani Stadium kick-off at 3pm on Saturday.

Mohammedan Sporting are fourth on Group C log with seven points, while Chhinga Veng leading the standings with 16 points, both after six games. The Black Panthers needs to win at any cost as anything less than three points could potentially end their final round aspirations.

This clash promises to be an entertaining affair as both sides play an attacking brand of football and will be full of confidence after posting impressive results in their respective last matches. Mohammedan Sporting come into the match on the back of a 4-0 win over ATK Reserves on Monday, while Chhinga Veng have defeated a strong Rainbow Athletic Club 3-1.

“I am impressed with the commitment of my boys as we are gradually finding our shape. Yes, we did not start too well as we would have wished but we are steadily getting into our groove,” said Nandy.

Although, Mohammedan Sporting have been beaten 0-3 by Chhinga Veng FC in the corresponding fixture in January, Nandy has expressed confidence in his team’s ability.

“For us it’s one game at a time. It doesn’t matter who we are up against, we back ourselves against anyone. We want to stay true to ourselves by playing our best football. We pace ourselves and we know what we are capable of doing,” he added.

Nonetheless, Mohammedan Sporting’s defensive frailties, struggling to deal with fast attackers, has dented their final round ambitions. If it wasn’t for their attack, they wouldn’t be considered in the race such is the state of their defence where they struggle to keep clean sheets. In the final stretch matches will be decided by small margins, like being tight at the back in close encounters.

The Black Panthers will also need skipper Philip Adjah to return to his best form. There is no doubt that Adjah is one of the most talented strikers in Second Division League currently. When he racked up 21 goals and assisted 6 prior to the league, similar things were expected from him. However, the alarming rate of inconsistency in his performances has been a worrying factor. Maybe the weight of expectations has proved to be too much for him to handle.

Many times, Adjah looks like he has been caught in two minds in front of the goal. His lack of composure while finishing opportunities has proven to be very costly for Mohammedan Sporting, and with just four games remaining in the Preliminary Round, Adjah needs to change gears before it’s too late.

AIFC sends proposals about Coaching roles to the AIFF!

In a letter to the AIFF (All India Football Federation), the AIFC (Association of Indian …