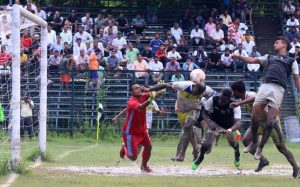 After a barren first-half, Arthur Kouassi (63′, 68′) struck twice in quick succession before Echezona Anyichie (73′) pulled a goal back for George Telegraph.

Despite having a slight advantage over their opponents in terms of familiarity with the ground, Mohammedan Sporting didn’t start much stronger than George Telegraph did.

Both teams struggled with their first touch, and neither seemed too confident of their abilities in the first 25-odd minutes.

Arthur Kouassi, Vanlalbiaa Chhangte and Mohammed Amirul looked as threatening today as they did in the previous match against Rainbow AC, however Echezona and his back-line were more than up to the challenge.

At the other end Joel Sunday and Morgan Justice once again led the George Telegraph offensive efforts but like their opponents, couldn’t find a way to break down that final line.

George Telegraph came out of the sheds fired up to bring themselves back into the contest, controlling the ball, winning set pieces and keeping Mohammedan Sporting pinned into their own back third.

However, George Telegraph weren’t able to keep up the pace and Kouassi soon struck twice in quick succession to give the Black Panthers a 2-0 lead.

First the Ivorian headed home a Vanlalbiaa cross in the 63rd minute, before converting from the spot five minutes later. The penalty was awarded to the Black Panthers after Ashim Kumar Dey committed a handball inside the box.

Nonetheless, George Telegraph, did not lose hope as they kept attacking with intensity and pulled a goal back through Echezona in the 73rd minute.

The match started to become a little tenser as the clock counted down with George Telegraph showing great determination in their pursuit of an equalizer, while Mohammedan Sporting remained solid at the back.

George Telegraph, to their credit, never gave up but it appeared as if getting on the score sheet just wasn’t to be for the side today with every shot went anywhere but on target as Mohammedan Sporting held on on for a well-deserved win.