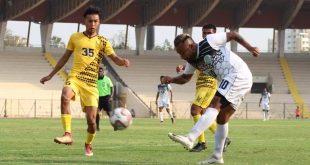 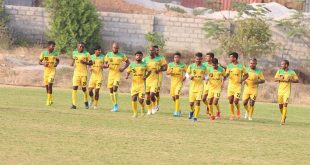 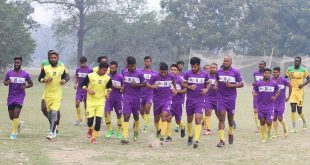 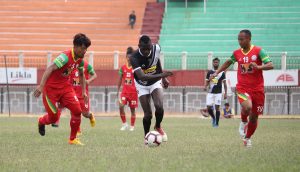 Mohammedan Sporting Club took another knock, after going down 1-2 to TRAU FC at the Khuman Lampak Main Stadium in Imphal on Thursday afternoon in a Second Division League Preliminary Round Group C game.

Former Mohammedan Sporting striker Princewill Emeka (25′) and Joseph Olaleye (56′) scored on either side of the pitch to make Philip Adjah’s (12′) opener count little.

TRAU started the match like a house on fire as they took the game to Mohammedan Sporting. The hosts created the first threat in the 7th minute when Princewill delivered a free-kick into the box, but Joseph was unable to hit the target with his header.

That proved to be a costly miss as Mohammedan Sporting took the lead five minutes later through Adjah, who collected a pass from Prosenjit Chakraborty before calmly slotting past Mithun Samonto.

TRAU then came close to levelling matters in the 18th minute when Balwinder Singh lost possession inside the box, but Princewill’s shot went wide of the target.

Princewill, however, redeemed himself by scoring the equalizer in the 25th minute. The Nigerian latched onto a loose ball in the box following a neat interchange of passing with Naocha Singh, to slot his shot into the top left hand corner.

From the goal onwards, TRAU dominated the proceedings and could have taken the lead in the 34th minute when they were awarded a penalty after Prosenjit Pal brought down Kivi Zhimoni inside the box. However, goalkeeper Priyant Singh produced superb save to keep out Princewill’s effort from the spot.

Meanwhile, Mohammedan Sporting also gave a good account of themselves in the later stages of the half but TRAU made sure they kept things tight and compact as the both teams went into the break locked at 1-1.

TRAU came out with intent in the second-half and carved out three chances in the opening few minutes. However, Priyant covered his area well to keep some stunning strikes by Princewill and Kivi at bay.

Nonetheless despite his best efforts Priyant could not hold TRAU off forever and as the clock headed into the 56th minute mark Jospeh scored from Kivi’s pass give his side the lead.

However, rather than let their heads drop, the goal spurred Mohammedan Sporting on and they began attacking with intensity. Mohammedan Sporting missed a myriad of late chances after coming alive in the final minutes but a series of horrid misses and some sparkling saves from Mithun kept them at bay.

Mohammedan Sporting who have four points from five matches will face ATK Reserves next on March 4 at the Howrah Stadium. 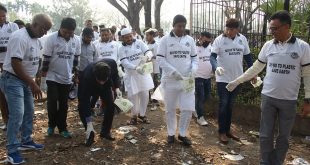