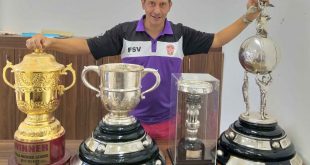 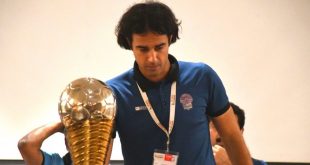 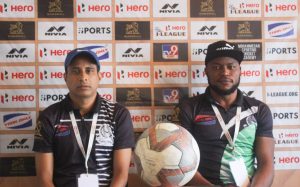 Mohammedan Sporting Club coach Sankarlal Chakraborty aims to harness the momentum that propelled his side into the 2020/21 I-League Championship Round when they face TRAU FC on Friday.

The match is slated for a 4:05pm kick-off at Kalyani Municipal Stadium and will be broadcast LIVE on 1 Sports with online streaming available on 1 Sports’ Facebook page.

Mohammedan Sporting head into the encounter on the back of an emphatic 2-0 win over Real Kashmir despite playing the bulk of the game a man down. The Black Panthers executed their game plan to perfection to deny the ball from their opposition before striking in clinical fashion.

Coach Sankarlal believes his players can take a lot of positives out of their performance against Real Kashmir. However, the gaffer insists he will not let complacency creep in as he sought to fine-tune his game-plan and feels they can still do better.

“Winning is always great and it is understandable that it gives the players a different confidence. But we don’t want our players to be relaxed and our aim is to keep improving with every single game. We want to improve on keeping the shape as well as improving the conversion rate,” said coach Sankarlal.

The gaffer also mentioned that his side is not focusing on the league table, rather their goal is to win the next match.

“We are not getting ahead of ourselves. I am taking each game as it comes. We need to keep concentrated and focused on the task at hand, and make sure that we play the next game in the best way possible,” he continued.

Coach Sankarlal made it clear that they are going to approach the game with a more patient lookout as they will prefer to read their opponents before hurling the attacks. Coach Sankarlal holds TRAU in high esteem and believes it’s going to be one of the toughest challenges of the league.

“This match against TRAU will be different compared to the one we played against them in Phase 1. They hold possession well, they are technically good and they have some quality individuals in their ranks. I admit that it will be a difficult match but we have prepared well for the occasion. Things are good in training. We are rectifying shortcomings and the players are responding well to our tactical philosophy. Hopefully, we can put on another good performance,” he concluded.

Striker John Chidi, who accompanied coach Sankarlal for the Pre-Match Press Conference, also sounded confident, “I am thinking of the team, if I don’t score and we still win I am satisfied. Against Real Kashmir it was a difficult game and tomorrow it is going to be another tough one. This match is totally different from those in the Phase 1. We know this is going to be a difficult game against TRAU, a very fast team but will do our best to get the three points.”

Better news for the Black Panthers is they head into the match without injury worries, however, they will be without skipper Eze Kingsley, who is suspended after getting a straight red against Real Kashmir.

Though coach Sankarlal has admitted that the absence of someone like Kinglsey will be a major loss for his side, he ensures that the rest of the squad will soldier on and do the business against TRAU.

The match between the two sides in Phase 1 ended in a 2-2 draw in January. Komron Tursunov and Helder Lobato gave TRAU a comfortable 2-0 lead before the Black Panthers struck back in the second-half through Nikhil Kadam and Hira Mondal as both teams shared the spoils in a four-goal thriller.