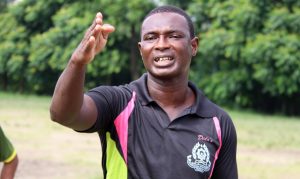 “We are at that stage of the league where points matter most,” commented Saheed Ramon after his side took three points from a resilient Behala SS Sporting Club in their Calcutta Premier Division ‘A’ encounter on Saturday.

“The match was tough. Credit goes to BSS. They really gave us a run for our money. It’s not always about how you play; it is about getting the points in the bag.”

The encounter finished 1-0 in favour of the Black Panthers with substitute Desmos Arthur Kouassi finding the back of the net late in the second-half.

“We made it very difficult for ourselves though,” admitted the former striker, as the sole goal only arrived in stoppage time. “We struggled with some of our passing games. We need to work on the penetration of space. However, compared to game against Bhowanipore FC, the attitude was great – the fighting spirit was there.”

“We dominated in terms of goal scoring opportunities,” continued Ramon. “We should have had the lead going into the half-time break, although I can live with the outcome because we can take a lot of positives out of this match going forward. We will take these three points and go back to the training grounds to prepare for our next match.”

The players won’t have much time to rest though as the Black Panthers will play Mohun Bagan on September 19 at the Saltlake Stadium.

“We will have to recoup and regroup quickly to be ready for Thursday’s game,” said Ramon. “There’s no time to dwell on this result.”