Mohammedan Sporting’s Subrata Bhattacharya: We sweat more in practice, so we bleed less in battle! 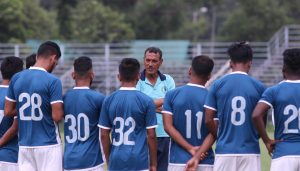 Mohammedan Sporting Club coach Subrata Bhattacharya says each day his players are growing stronger as a team during their pre-season.

The former defender has been overwhelmed with players’ commitment to training since taking the helm of the team last month.

“I think the boys are really working hard. Each day we grow stronger and are more united as a team,” he said.

Bhattacharya stressed how well the new inclusions are doing in training and their strong bond with the rest of the squad.

“Players are interacting more with each other building more chemistry and the new group of players has adapted well to our training philosophy,” he added.

This year’s Calcutta Football League is likely to be the most competitive in years as Southern Samity, Bhowanipore FC and Peerless SC have been able to put together a squad, strong enough to challenge for the title alongside East Bengal and Mohun Bagan.

“I have no doubts that this will be by far, the toughest Calcutta Football League campaign in years and that is why we are preparing like never before,” said Bhattacharya.

“What we have been doing in the training sessions in a competitive environment so we can assess what is working and what is not so we can make improvements for the next session to try and minimize the mistakes we make. We know the challenges ahead of us and each day we sweat more in practice so we bleed less in battle,” he added.