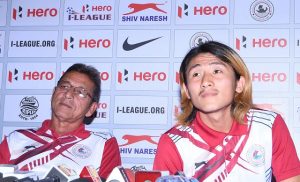 On resumption of the I-League after the International break, Siliguri is gearing up to host the second leg of the all-important Kolkata Derby which might tweak the Championship calculation again tomorrow night.

East Bengal coach Trevor Morgan reiterated that tomorrow is nothing but another match and even his Mohun Bagan counterpart Sanjoy Sen maintained the same stand on this.

“There’s nothing difference between a Kolkata Derby and another I-League match. But it’s always difficult to pick up points in these matches. As the calculation says, we’ll be four points clear of Mohun Bagan. On the other hand, the championship might slip off our hands if we leave the ground as second best,” Trevor Morgan sounded pretty cautious while addressing the media at Siliguri.

“A derby is not only a physical game which is played on the pitch but also a psychological one. A win is always welcome for us but if we don’t steal all three points tomorrow, it won’t be the end of the world,” Sanjoy Sen asserted it in the same tone as well.

On being asked whether Wedson can be played tomorrow, Morgan cut it short, “Wedson is in the squad!”

Morgan added more, “Their current form speaks volume. To put it straight, I was very disappointed with some players’ form in our last fixtures. We have to toil hard for success but trust me, when it comes, nothing can be sweeter than this.”

Mehtab Hossain, the veteran Red & Golds midfielder reasserted that it might be his last season with his current team unless they lift their maiden I-League trophy.

“Obviously it hurts always finishing empty-handed. I’m a life member of East Bengal club, the relation will last forever but when it comes donning the jersey, this season might be the last one if we fail to live up the expectation of clinching the trophy,” Mehtab sounded confident but complacent in the pre-match press conference.

The veteran warhorse backed T.P. Rehenesh, whose bloopers cost East Bengal three points in Chennai, “If you remember, Rehenesh was the Hero of the Match in the last derby. It’s a team game and we can’t put all the blame only on Rehenesh. In no position, he should be reprimanded for the goals. We have conceded the goals and we’ve to find the way out now to get the better results in the leftover matches.”

Morgan and Mehtab both mentioned that they’ll have a keen eye on Aizawl FC who’re slated to play Bengaluru FC at the Sree Kanteerava Stadium tomorrow.

On the other hand, Katsumi Yusa weighs this edition of the Kolkata Derby as a heavier one, “It’s a very important derby for Mohun Bagan and the result will be significant in terms of winning the league.”

He added more, “We need to work on our attacking skills to net more goals. You know, goals win matches and we can’t afford to squander any opportunity tomorrow.”

On being asked whether their form away from home might be a worrying aspect tomorrow, Sanjoy Sen said, “Yes, we feel at ease at home. We must improve our away form. Still, we are left with three away fixtures and all of them are equally important to win the league. It hardly matters whether we’re playing in Kolkata or Siliguri, we have to play an immaculate game to get the better of our opponents.”

The much-anticipated Kolkata Derby is slated to kick-start at 7pm and it’ll be telecast on TEN 2.