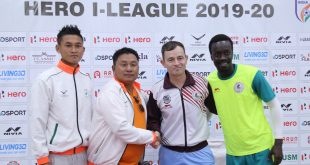 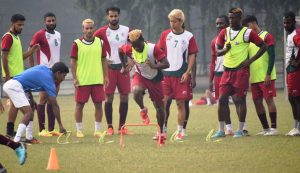 Even the most ardent follower of Indian football would not have predicted at the start of the 12th I-League season that Chennai City FC would sore up to lead the race after five game weeks.

But that is how it is and after having won five of their six games remaining unbeaten, the juggernaut now reaches the home of Kolkata giants Mohun Bagan for a clash at the Saltlake Stadium on Saturday, December 1. It will be the second game of Super Saturday and will kick-off at 5pm IST.

The visitors are on a dream run while the hosts are on the backfoot after a stunning reverse against Churchill Brothers of Goa in the last game. Only two statistical points work in Mohun Bagan’s favour going into the game. The fact that they have conceded two fewer goals than Chennai City FC in the campaign so far, albeit with a match in hand, and the fact that they lead the head to head 2-1.

Besides such trivia, the prospect of facing Chennai City FC’s Spanish armada seems daunting even at home. What has stood out for the southerners this year has been that every time they have conceded, and they have in every game, they have come back confidently and with a vengeance to score.

The visitors’ Singaporean coach Akbar Nawas would be ever so grateful for the services rendered by his Spanish quartet, in particular by midfielders Nestor Jesus and Sandro Rodriguez, for the position in which they find themselves in. Although no praise is worthy enough for the kind of performances that Indians like Romario Jesuraj, Lourdusamy, Ajith Kamraj and the likes have dished out in the company of the Spaniards.

“We take to every game to compete and see where does that leave us after 90 mins. That’s what we have set out to do. We take Mohun Bagan as a team seriously and will play to compete with them as a team,” said Akbar Nawas ahead of their game against Mohun Bagan tomorrow.

Mohun Bagan, on the other hand, have been a bit shaky in their approach to the season, which might come back to haunt them at the business end of the league. They had two wins for the taking against Gokulam Kerala FC and Aizawl FC but threw them away, despite dominating the games. Against Churchill Brothers, their defence was thoroughly exposed and coach Shankarlal Chakraborty will have more than his hands full on Saturday.

“Nestor, Manzi belong to a different class. If you go to mark them individually, you are bound to fail. You have to focus on zonal marking and we’ll plan accordingly too,” said Mohun Bagan’s head coach Shankarlal Chakraborty.

He further added, “There are minor niggles but not any major injury concern for us. Sony is getting fitter with every training session and the process will continue.”

As XtraTime reports from Kolkata, at the Quess Corp offices in Saltlake Sector-5, their CEO …