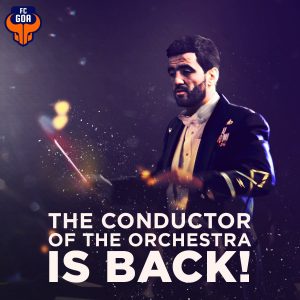 Indian Super League franchise FC Goa have announced that influential Moroccan midfielder Ahmed Jahouh has extended his stay with the club for the 2018/19 season.

Jahouh joined the Gaurs at the beginning of the fourth season and was part of a successful season under head coach Sergio Lobera. The Moroccan was a hugely influential member of the team dovetailing well in midfield with Edu Bedia.

The 29-year old is known for his imposing physicality and was a key cog in Lobera’s system last season. He was used as an anchorman and was integral in breaking-up the play and starting to build attacks. Jahouh dominated the league statistics; finishing as the top passer with 1,625 passes and tackles with 105 tackles through the season. “I am delighted to have signed a contract extension with FC Goa”, he said. “We played some amazing football last season and the entire country took note of it. But more than this, it was the amazing love and support I’ve received from the fans that made my decision to sign for this great club easier. I am very excited for the new season to begin and am really looking forward to being back in Goa.”

FC Goa head coach Sergio Lobera was full of praise after retaining the the services of the Moroccan midfielder. “Everybody that has seen Jahouh play already knows his great performances from last season. He was one of the best midfielders in the league and plays a key role in our system. I am very happy that he has decided to continue with us despite having many offers from other clubs.”

Previous AIFF Technical Committee meets at Football House in New Delhi!
Next India U-16 coach Bibiano Fernandes: Better to go all out for a win in practice matches!