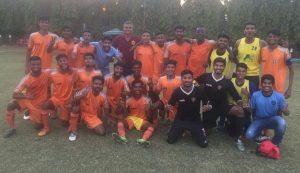 A young PIFA Colaba FC team mainly comprising of players from the Colaba Community have reached the final of the 110th Nadkarni Cup following a 5-4 penalty shootout win over Mumbai FC Under-19s at the RCF Ground in Chembur.

The game had ended one-all in regulation time with Chirag having scored for PIFA in the 90 minutes. In the shootout the five PIFA penalties were scored by Sushant, Elvis, Sanjay, Kapesh and Pragnesh, while one of the Mumbai FC Under-19 youngsters missing his shot.

The 110th Nadkarni Cup knockout tournament is being held this year with 15 leading Elite and Super Division teams of the MDFA League for the top honours in the tournament organised by RCF Sports Club under the aegis of the Mumbai District Football Association at the RCF Colony ground in Chembur.

PIFA, who had finished runners-up in 2011, had started the tournament in the pre-quarterfinals with a 4-3 thrilling win over HDFC, followed it up with a 3-0 win over the Kenkre U-19s and then the penalty win over Mumbai FC U-19s.