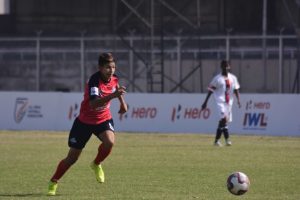 It was around a decade ago when an odd figure could be seen dribbling a football around the fields in the hilly district of Lamjung in Nepal – a lanky girl running circles around a bunch of confused boys with a makeshift football made out of socks glued to her feet.

That lanky girl, who all now know, as Sabitra Bhandari has continued to do the same for the last decade and is now running circles around some of the best defenders in South Asian women’s football at the Indian Women’s football. She is Sethu FC’s foreign recruit.

“The Indian Women’s League is of a high standard. This is not exactly the case when it comes to futsal in Maldives, or in Nepal, where things have just started to develop. When I am playing a IWL match, it feels like I am playing an International match, the organisation is of such a high level,” said Bhandari.

Having been a prolific scorer for Nepal in the International circuit, Bhandari has had her fair share of experience playing and scoring against India. Now however, she is playing alongside a number of India internationals like defenders Sweety Devi and Ashalata Devi, forwards Dangmei Grace and Sandhiya, and playmaker Ratanbala Devi.

“Yes, I’ve played against them a lot at the International level, but I think I have improved a bit after training with these girls for a few weeks,” smiled Sabitra. “It’s a team game at the end of the day. I am happy to learn from them during every training session and every match.”

Once she was in the APF Club set-up, it was only a matter of time when Sabitra turned heads and broke into the National team. She got her International debut in the 2014 SAFF Women’s Championship against Bhutan, and Sabitra did not disappoint as she scored on her international debut in an 8-0 win Jinnah Sports Stadium in Islamabad, Pakistan.

Since then, Sabitra has gone on to become one of the most prolific strikers in South Asia. Most recently, she earned the joint top-scorers’ award at the SAFF Women’s Championship, earlier this month at Biratnagar, Nepal.

Sabitra has made a reputation of being a prolific striker, who has the ability to intricately link-up with her fellow forwards and the playmakers. Additionally, she is also a striker who is always at the opposition defenders’ heels when they have the ball.

The Nepali striker believes that she gets these attributes from her two seasons in Maldives, where she played futsal for Airport Club, and the Police Team.

“The defence to attack transition is very quick in futsal. That is something that can be very effective in football if implemented properly, especially because it’s such a big pitch,” she said. “Even the defenders get to learn how to quickly switch from defence to attack in a flash.”

Coming from a humble background, where her parents struggled to make ends meet while providing for five daughters and two sons, Sabitra grew up under a lot of financial duress. A bundle of old socks would be patched together to make a football with which the village boys would play.

However, not everyone took kindly to the fact that Sabitra too would go to play football alongside a number of boys.

“Back then, society did not look kindly upon a girl who wanted to play football. But I did not think like that. They would say ‘you’re a girl, so act like one’. But all I wanted to do was to play. I was never ashamed of going out and playing with the boys,” she said.

With the support of her family and the boys with whom she played in the local ‘maidans’, Sabitra continued to perform in sports at the school level. She did not have the opportunity to play in a football team as there were no women’s football tournaments in her area.

Hence, the youngster took to athletics, and volleyball, and even went on to win a gold medal in 100m sprint at the school nationals. However, her talent was spotted when Sabitra and her friends put together a team to play in a women’s tournament in Kathmandu.

“Getting a job at the APF Club helped me a lot. I could now regularly help my family. It was not easy for my parents who had to so many mouths to feed back home,” said Sabitra.