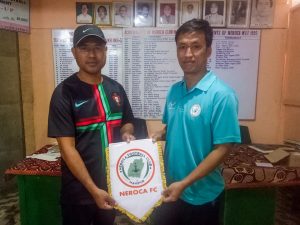 I-League side NEROCA FC today announce that former India midfielder Wangkheirakpam Tomba Singh will be their new assistant coach for the 2020/21 season.

TeenageTomba played a major role in Manipur U-19s lifting the U-19 National Football championship held at Imphal where the hosts defeated Sikkim 4–1 in the final.

Tomba made 12 appearances for Team India, but due to injuries didn’t get more caps for India.