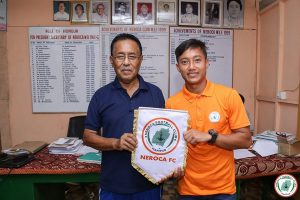 I-League side NEROCA FC have announced the signing of talented winger Khundom Lucky Singh on a two year deal ahead of the 2020/21 season.

He returned to his home state to play for YPNU and impressed in the Manipur State League, which has now earned him a contract with former club NEROCA FC

Meanwhile NEROCA have over the summer lost a number of their regular players and therefore they have been looking at players from the Manipur State League as replacements.