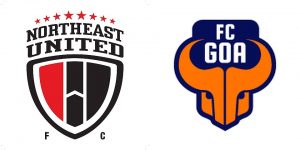 On Friday night, FC Goa go up again against NorthEast United FC in a quest to get back to winning ways. Having started the season on a high-note against Chennaiyin FC with a resounding 3-0 win, a late penalty from Coro was needed to bring home a point in their last game at home to Bengaluru FC.

Now away from home comforts for the first time this season, a stern test awaits last season’s runners-up as they go up against a NorthEast United FC side buoyant in spirit and high on confidence.

NorthEast United FC come into the game having taken a lot of positives from their first two encounters of the season. The team have been able to keep some of the key components of last season’s team with them. And the familiarity seems to be paying dividends for them even under a new coach.

After beginning their campaign with a battling goalless draw against Bengaluru FC, Robert Jarni’s men toppled Odisha FC in their home opener on October 26 to be level on points with the Gaurs.

With Asamoah Gyan leading the charge at the front, one will be foolish to discard the threat possessed by the Highlanders. Add to it a mix of experience and quality in the midfield and you get a heady concoction for a team that knows how to eke out results.

Having proven their validity once already this season away to Bengaluru FC, the NorthEast United FC side will look to again prove the doubters, if any, wrong when they head up against the winning-est side in the ISL.

“NorthEast United is a very good team. They have both experience and quality and Friday will be a very good tough game for us,” stated FC Goa head coach Sergio Lobera before the game.

“We did start the season well with a win against Chennaiyin FC, but the last game was a tough one against Bengaluru. They are a good side and tested us to the limits. We also showed that we are truly a side that doesn’t give up easily and we got a point out of that. I am very happy in that regard.”