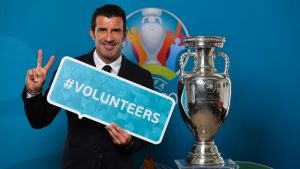 UEFA EURO 2020 will be the most diverse edition of the tournament in history. Hosted in 12 European cities in order to celebrate the 60th anniversary of the UEFA European Football Championship, this will also mean that the 12,000 volunteers assisting at the event will be spread out across the continent.

The recruitment campaign for the UEFA EURO 2020 volunteer programme officially closed at the end of January 2020, with the national associations of the 12 host countries helping to raise awareness across the continent through promotional campaigns.

Over 37,000 applicants applied from 159 countries to become volunteers in one of the 12 host cities. This is the highest number of applications ever received for a EURO tournament. A total of 88% of the applications are from people based in one of the host countries, meaning the volunteers will bring invaluable local knowledge and will be ambassadors for the fans during the tournament.

“There is a rich tradition of volunteering at all major sports events and UEFA EURO has never been an exception. Those who are eventually chosen will have the opportunity to have a once-in-a-lifetime experience this summer,” said UEFA Events SA CEO Martin Kallen.

“Through volunteering, UEFA and the local organisers in each host city offer local people the chance to be part of one of the biggest sports events in the world and in most cases the largest footballing event organised in their city. They are able to learn invaluable skills which will help them in their future professions and make long-lasting friendships with people from across the continent.”

Over 60% of applicants are under the age of 25, with the role of a volunteer providing them with an excellent opportunity to gain first-hand experience of assisting at one of the world’s biggest sporting events. A total of 41% of applications were from women.

Ahead of UEFA EURO 2016, which took place in France, there were 22,000 applications put forward to become volunteers at the tournament, of which 36% were submitted by women.

The 12,000 volunteers selected for UEFA EURO 2020 will now receive more information about their specific assignments. A specific e-learning platform will open at the beginning of March, where online modules will help them prepare for their tasks ahead.

After the tournament, the volunteers will be able to use the vital knowledge and expertise they have gained to help create a long-lasting legacy both inside and outside of football.

For those who miss out on the chance to be part of the UEFA EURO 2020 volunteer programme, the 12 host cities will also be launching their own volunteer initiatives.