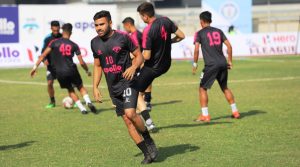 Defending champions Chennai City FC will be travelling up north for their second I-League fixture this term, as they take on hosts Punjab FC at the Guru Nanak Stadium in Ludhiana. The match is scheduled for a 2pm IST kick-off and will be broadcast LIVE on I-League official Facebook page.

Punjab FC have registered just one point from their opening two fixtures, having lost 0-3 to Churchill Brothers followed by a 1-1 draw against East Bengal at home. The hosts led against East Bengal for the majority of the game, only to be denied three points by a late equaliser from Juan Mera.

Reflecting on the positives from that match, Punjab FC head coach Yan Law said, “We had a fantastic game against Quess East Bengal and we dominated the entire game. We created many chances and unfortunately couldn’t convert them. The late equaliser wasn’t expected as our defence was rock solid the entire game.”

Looking forward to hosting the defending champions, he further added, “The boys are confident about the next game against Chennai City FC and we are not going to make the same mistakes we made in the previous matches.”

“We are not much worried about their attack as we have quality defenders in our team and they have worked very hard for this game. We are surely looking for a positive result.”

Chennai City FC, on the other hand, have played only one match this season, having not been in action in Round 2. The southerners won 1-0 at home against newcomers TRAU FC on the opening weekend and will be looking to step up a few gears to find their killer instinct infront of goal.

Speaking ahead of the match, Chennai City FC head coach Akbar Nawas looked back on his side’s performance in their opening fixture and said, “We have to continue to improve our game in every match we play. It’s always a learning curve for us.”

Previous India U-17 Girls land in Mumbai for U-17 Women’s Football Tournament!
Next Buoyant NEROCA focused before facing East Bengal in I-League at home!