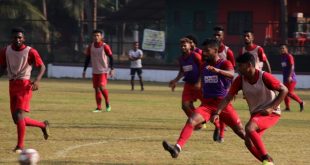 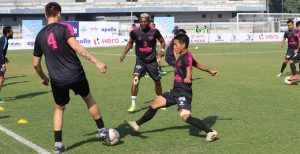 The I-league resumes again after a two-day break and this time it is a clash in the north of India. Punjab FC, who are placed second on the points table, will be going up against eighth-placed NEROCA FC, who has been having a rough season.

The match will be broadcast LIVE on FanCode from 2pm IST.

Punjab FC have been on a dream run this season and have been unbeaten so far on their home soil. The form of I-League veteran Dipanda Dicka and the tactics of young head coach Yan Law have been the talk of the town.

Speaking before the match, Punjab FC head coach Yan Law said, “We are definitely working towards winning the title this season. We have to win the next couple of games on the trot to be at the top of the table, but it’s not going to be easy.”

“After this we play against play Mohan Nagan and East Bengal back-to-back away in Kolkata, followed by Gokulam Kerala in Calicut. So the next couple of games are very tough and important for us as we are definitely playing for the title.”

He also commented on upcoming fixture, “Next game against NEROCA is going to be tough as they are also looking towards getting a win after the last few games didn’t go their way.”

NEROCA FC, on the other hand, lost their last match at home against leaders Mohun Bagan by a huge 0-3 margin. To NEROCA’s disadvantage, they have had a very poor run, whenever they have faced Punjab FC. Both the teams have met five times in the league and four times the result has gone the way of Punjab FC with one draw.

NEROCA FC gaffer Gift Rai Khan said, “I know the results have not been in favour of NEROCA FC but it is football, each time we lose a match we have to go back to drawing board and start fresh. We have another 12-13 matches in our hand and we are taking the encounter against Punjab very seriously.”