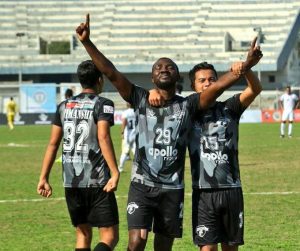 The clash of the Northern teams in Ludhiana ended with the extension of Punjab FC’s unbeaten home run as they defeated Real Kashmir FC 1-0. Dipanda Dicka’s strike was the differentiator as he went to the top of the goal-scoring charts with nine goals in the league – tied with Mohun Bagan’s Fran Gonzalez.

The first half began and it was Robin Singh who had taken up the mantle of being the lead striker as Real Kashmir FC featured in an encounter after a week-long break.

Punjab FC played the first half looking to maintain possession and ended the first 45 minutes with 67% of the ball.

With very less possession, Real Kashmir FC were left to do a lot of chasing and depended on counter-attacks to make something happen. With a lot of game being played in the midfield, it was looking as if the half will end with parity.

However, Punjab FC had other ideas. In the 44th minute, an attack which started with the Punjab FC talisman Dipanda Dicka was joined in by Cavin Lobo. Dicka played a beautiful one-two with Lobo and with a delightful first-time strike, he sent the ball between the legs of the Real Kashmir FC keeper to put his team in front at the brink of half-time.

The second half resumed and it was Punjab FC who were carrying the momentum as they built pressure upon the Snow Leopards. Soon after, it was again Dicka who came up with a strong left-footed strike from the edge of the box and it needed Phurba Lachenpa to come up with a diving save on the near post to keep the scoreline intact.

The game then went into a phase where there were not many chances for both the teams. Punjab FC was pretty content in holding on to the 1-0 lead and were sitting back to ensure that Real Kashmir FC weren’t able to string a proper attack together.

With less than 10 minutes to go in regular time, it was second-half substitute Souvik Das who had a go at the Real Kashmir FC goal from distance with an out-swinging strike which again demanded the keeper from Kashmir to come up with flying one-handed save.

In the fifth minute of stoppage time, Real Kashmir FC got their best opportunity of the match. A ball from the right flank by Mason Robertson found a leaping Bazie Armand’s head inches away from the goal but instead of finding the back of the net, the ball went over the crossbar.

The referee blew the whistle and Punjab FC won the match 1-0. Dipanda Dicka won the Hero of the Match award for his solitary goal.

As XtraTime reports from Kolkata, Mohun Bagan youngster Subha Ghosh in under lockdown like the …