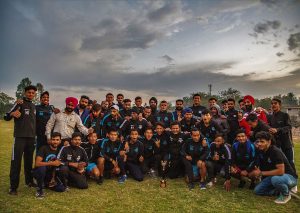 Punjab FC kicked off the tournament against familiar foes Khalsa Warriors whom they have faced earlier in their title winning Punjab Super League campaign. Punjab FC scored the first goal in the 32nd minute thanks to Himanshu Jangra’s superb effort from just outside the box. In the second half, Punjab FC doubled their lead through a beautiful curler by Dilliram Sanyasi. Himanshu assisted another in the second half as Punjab FC came out on top with a score line of 3-0.

In the semifinal, the Warriors faced Mahilpur College. Girik tapped one home from a low ball to open the score line for Punjab FC. In the 73rd minute Harminder doubled the lead in favour of Punjab FC. A goal on each half were enough to take the Warriors in to the final.

Punjab FC faced Dalbir Football Academy in the final. Punjab FC kicked off the first half and looked lethal from the very beginning. In the 10th minute, Punjab FC came close to open the scoring but the ball was just inches away from perfection. The Warriors dominated the midfield and made many attacks. In the 25th minute Bhaskar Roy made a spectacular save to deny the opposition. Minerva dominated the 1st half of the play and made so many chances. In the 35th minute Punjab FC scored the opening goal assisted beautifully by Himanshu Jangra. With this assist Himanshu was directly involved in three goals in this tournament. In the second half Dalbir FA started to dominate the game and tested the Punjab FC goalkeeper, Bhaskar on numerous occasion but he was up to the task and saved all of them. There were few attacks by Punjab FC as well from both the flanks but none of them got capitalised and after the normal time eventually Punjab FC declared as Champions.

After the second successive Punjab Super League title and Sukhia Gold Cup title this was the third title the Warriors have won this pre-season so far and their main aim is to give their all to win the I-League trophy once again.

Punjab FC will be away to Churchill Brothers on December 1 to kick off their 2019/20 I-League campaign.