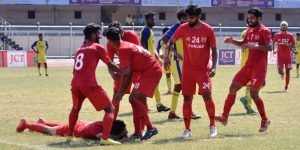 Punjab made it through to their 15th Santosh Trophy final on Friday at the Guru Nanak Stadium in Ludhiana, beating traditional rivals Goa by a 2-1 margin.

Harjinder Singh scored the winning goal on this occasion to put the home side into the final.

Punjab started off the match with great gutso plunging into the attack from the get-go.The home side was heavily reliant on their wide players Sunny and Jaspreet Singh. Both the wide players toiled hard to generate swift attacks, aiming the ball at the heavily-marked striker Vikrant Singh.

However, it was Jaspreet, who sneaked into the box from the right, and nodded in a cross from the left flank to put Punjab in the lead in the 12th minute.

The Goans were shell-shocked, but they picked up the pace soon. Their striker Lallawmpuia dropped deep to get more involved in the build-up play, which helped them gain more possession over the ball. A foul near the Punjab penalty area towards the end of the first half gave the Goans the perfect opportunity to score the equaliser. However, 19-year-old Lallawmpuia looped his free-kick a couple of feet over the bar.

Goa came out in the second half all guns blazing, as they laid the proverbial siege on the Punjab goal. Punjab attempted to clog the away side out in the middle with four midfielders, while Jaspreet and Sunny operated the flanks as Vikrant played the targetman.

Goa finally got the breakthrough with a minute of regulation time left of the clock, when Joachim Abranches got a shot through a melee of legs in the Punjab box. Keeper Satbir Singh parried it straight to substitute Ronaldo Oliveira, who tapped it into the net.

It took Punjab just a couple of minutes to get their lead back, when Mohd. Asif sent in an indirect free-kick which was nodded in by Harjinder to take the tie away from the Goans.

With this win, Punjab have now entered their 15th Santosh Trophy final.