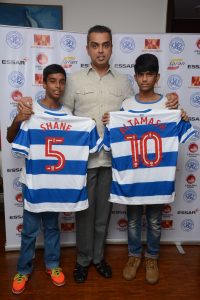 As part of the 8th edition of the QPR South Mumbai Junior Soccer Challenger, two talented youngsters were selected at a special talent hunt camp held in Mumbai in January 2017. The boys will be heading to England to train at the QPR Academy in London for a fortnight.

The QPR-South Mumbai Junior Soccer Challenger 2016, a Milind Deora initiative in partnership with English Championship side Queens Park Rangers FC, is India’s largest community football event. The event was conceived and is managed by Saran Sports.

Close to sixty children were shortlisted for a special talent hunt camp conducted by professional coaches after which two talented youngsters were selected:

This opportunity is going to be a life time experience to train at the famed QPR Academy which produced English striker Raheem Sterling who shifted as a youngster in 2010 to Liverpool FC and is currently playing for Manchester City.

Profile of the Winners