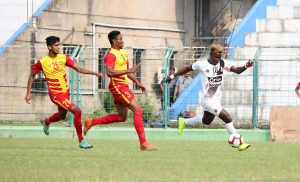 Rainbow Athletic Club dented Mohammedan Sporting Club’s hopes of qualifying for the final round of the Second Division League after beating them 2-0 in an Preliminary Round Group C clash on Sunday.

In a tight game which could have gone either way, Rainbow AC scored on the either side of the half through Joel Sunday (4′) and Sourav Roy (90+2′) to hand the Black Panthers their fourth defeat of the campaign.

Going into this clash, Mohammedan Sporting (13 points) were on second place in Group C. But now must beat Jamshedpur FC Reserves in their last Preliminary Round match and at the same time hope TRAU FC (14 Points) and Rainbow AC (13 Points) drop points in their respective matches in order to qualify for the final round first time since 2015/16 season.

Mohammedan Sporting, enjoying good support in the stands, started the match on the front foot and had a few promising moments early on, but were kept in check by Rainbow AC’s defence of Emmanuel Chigozie and Enjamul Haque.

It was at the other end, however, where the opening goal arrived and it was Sunday who scored to give Rainbow AC the lead in the 4th minute.

Mohammedan Sporting though created many chances but failed to equalize, as they failed to stick to their passing game policy. The players seemed to be more keen on playing direct football sending long balls from the centre-line as the Rainbow AC defence held firm and ensured that they retained the advantage going into the break.

In the second-half, the sides came out of the changing rooms with different tactics. Mohammedan Sporting were the first to surge forward, once again with the blistering pace of Philip Adjah, but Rainbow AC’s defence were up to the standard and managed to clear.

Mohammedan Sporting had most of the possession as the game wore on. But Rainbow AC intelligently and stubbornly defended their lead.

And with the home team pressing forward, their could always be the chance the other way, materialising when Sunday’s pass picked out Sourav to produce a fine strike into the top-right corner to put the game beyond doubt.