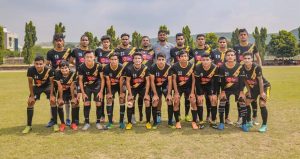 In a matter of great pride for the city and state, Rajasthan Football Club becomes the first ever club from the state to represent in the Second Division League. After being nominated by the Rajasthan Football Association on the basis of the year long accomplishments, consistent performance and the youth system, the club went through rigorous licensing process by the All India Football Federation. Post completing and meeting all criteria’s the club will be competing against LoneStar Kashmir FC, ATK Reserves, Jamshedpur FC Reserves, Punjab FC and Garhwal FC.

The club has chosen Umaid Singh Stadium, Jodhpur as its home ground and will be looking forward to fans coming in large numbers to support the home team. The dates of the matches are yet to be announced with the Second Division League set to be played from January end to April end.

On the occasion of the great achievement, the club CEO Sohil Bhansali firstly expressed his gratitude to the support received from the state football association through president Manvendra Singh, secretary Dilip Singh Shekhawat and vice-president Nadeem Anjum. Staying to his commitment of developing and promoting the game in the desert state, Sohil focused on promoting the local talent and providing them maximum exposure and experience to excel at the top most level.

The team this year is going to be a mix of young and experienced players. As the CEO it is with great honour and pride that we announce our arrival at the national stage taking along with us the young blood of Rajasthan football. From day one our goals were set and as matter of fact we achieved the same within a year and half of starting the club. Winning and losing is part and parcel of the game but at this stage what is extremely important is the experience which the players and coaches will receive along with bringing in an all together different level of the game and culture in the state.

Speaking on behalf of the Rajasthan Football Association, secretary Dilip Singh Shekhawat congratulated the management of the club and all members associated with the club on achieving these great feet. With football growing rapidly in the state, he assured Rajasthan FC and all football enthusiasts the continuous support which the state association will keep on providing for developing the game.