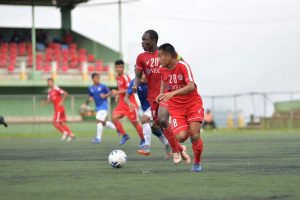 I-League champions Aizawl FC were held to a draw by Ramhlun North FC in the opening fixture of the Mizoram Premier League – Season 6 with both teams scoring a goal a piece at the Lammual Stadium in Aizawl.

Both teams playing under new head coaches played with vibrant energy and looked to get on the front foot early on. And it was Ramhlun North FC who struck first in the 12th minute. Ramdina’s delivery from the right flank was calmly slotted in by Lalliansanga.

Lalthathanga almost scored an equaliser for Aizawl FC in the first half and midfield enforcer Alfred Jayran missed a good opportunity as well.

Aizawl FC finally found the net on the 35th minute with a strike from young forward Jonathan Lalrawngbawla.

Ramhlun North FC looked bright after the restart with goalscorer Lalliansanga again creating problems for the opposition backline. He missed a great opportunity to give his side the lead while Lalremruata forced an excellent save from Aizawl FC goalkeeper Avilash Paul.

The introduction of William Lalnunfela, Paul Ramfangzauva and Shylo Malsawmtluanga made Aizawl FC a more threatening unit going forward late on but Ramhlun North FC were able to hang on till the fulltime whistle.

Legendary Mizo footballer Malsawmtluanga made his MPL debut by coming on as a substitute in the 76th minute and was welcomed with a loud cheers from both sets of fans.

Ramhlun North FC’s goalscorer Lalliansanga who put in an industrious shift was named the Man of the Match.