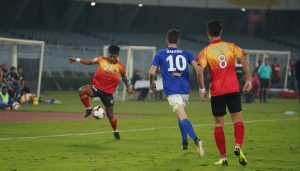 Jobby Justin’s sixth goal of the 12th I-League campaign was not enough to stop debutants Real Kashmir FC from taking a point at Kolkata’s Saltlake Stadium on Friday. East Bengal players scored both the goals of the match with defender Lalramchullova accounting for an unfortunate own-goal.

Both coaches, David Roberston of Real Kashmir FC and Alejandro Garcia of East Bengal, made one change to their starting line-up from their previous games. Real Kashmir FC brought in Zambian Aaron Katebe to play in defence in place of Muhammad Hammad while Samad Ali Mallick quite ironically made way for Chullova to regain his place.

Real Kashmir FC’s Ghanaian striker Abednego Kofi Tetteh, who scored in their last game, got the first good chance of an otherwise tepid first half in the 29th minute when a loose ball fell to him inside the East Bengal box but his shot was brilliantly parried over by Rakshit Dagar.

East Bengal came back immediately with a chance of their own after a wonderful build-up involving Jamie Santos, Lalrindika ‘Didika’ Ralte and finally Laldanmawia Ralte, created a chance for Brandon inside the Real Kashmir FC six-yard box but Loveday’s crucial touch ensured that the ball eluded him.

On the 42nd minute, Surchandra Singh found himself in the clear inside the box on the right, but Rakshit brought off another good save to thwart his powerful strike.

Real Kashmir FC went into the lead almost immediately in the second half. Kofi found a brilliant Surchandra run into the box on the right, who put in a regulation cross. Lalramchullova rushing back to cover, tried to clear but miss-kicked into his own goal.

East Bengal came back into the game on the 56th minute. Off a Didika corner from the right flank, Frenchman Kassim Aidara rose first to head towards goal but the ball ricocheted back off the Real Kashmir FC defence but only as far as a lurking Jobby Justin close to goal.

The Kerala striker made no mistake as he thudded the ball into the roof of the net for his sixth goal of the league.

The game petered out after that, save two chances for East Bengal’s Spanish forward Jamie Santos Colado. In the first, he chested the ball down beautifully just outside the Real Kashmir FC box and unleashed a shot on the turn, but it was just off target.

Just minutes before the game ended, he connected with a sharp header to a wonderful cross from the right from Brandon, for Bilal in the Real Kashmir FC goal to bring about an important save.

Previous Khelo India Scheme to aims for mass participation and promotion of excellence in sports!
Next India’s Pronay Halder: The target is to get out of the group!