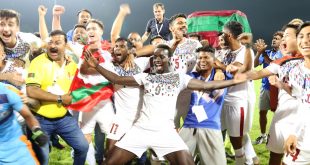 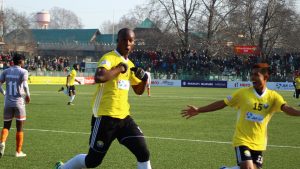 I-League debutants Real Kashmir FC completed the double over Chennai City FC after beating the table-toppers by a margin of one goal to nil at the TRC Ground in Srinagar on Monday.

This win takes the Snow Leopards level on points with second-placed Churchill Brothers (28). However, the northernmost team of the 12th I-League remains third on points table as their match against the Red Machines ended in a stalemate earlier this season, and the Goan side has a superior goal difference.

An 81st-minute goal by Gnohere Krizo did the trick for David Robertson’s men, who played a distinct Scottish-style football in the freezing Srinagar weather against Chennai City FC. The Ivorian attacker was also awarded the Hero of the Match for his efforts.

The game began at great pace as both the teams tried to get the early lead. While Chennai City FC played their brand of swift passing football with a Spanish flavour to it, Real Kashmir FC were more reliant on aerial counter-attacks, depending on the hold-up play of Mason Robertson and Krizo.

The first real chance of the match came on the 35th minute when Krizo broke free of the Chennai City FC defence and had just goalkeeper Santana Garcia to beat in front of him. However, the latter produced a fine save off the Ivorian’s volley to keep the scores level.

It was all about Real Kashmir FC, who used the 11,000-odd home supporters to their advantage to create chances. But much to his credit, Santana stood strong and kept the scores level at half time.

Both sides came out all guns blazing after the changeover and it was an absolute spectacle for the fans who braved the cold to make it to the stadium. Real Kashmir FC’s Katebe headed a corner over the bar, while Chennai City FC’s Nestor failed to control a delicate pass by Sandro, which he merely had to tap into the goal.

Chennai City FC head coach Akbar Nawas brought on midfielder Pravitto Raju with around 30 minutes of regulation time left on the clock but that did not deter the home side, who used their physical advantage to create the chances.

Krizo had another great opportunity on the 72nd minute when Robertson headed him through. The Ivorian dribbled past two defenders and unleashed a fine shot, but Santana was up to the task and parried it away.

With just nine minutes of regulation time left on the clock, Krizo finally put a chance away, as he nodded in a cross from the right flank, sending the home fans into delirium.

Real Kashmir FC could have doubled their lead just four minutes later as Bazie Armand thudded a Surchandra corner onto the crossbar. Chennai City FC gave it an almighty effort in the last few minutes but failed to come up with the goods.

This Real Kashmir FC win throws the title-race wide open, as there is just a five-point difference between the top (Chennai City FC) and the fourth-placed team (East Bengal), with the latter having played one match less.