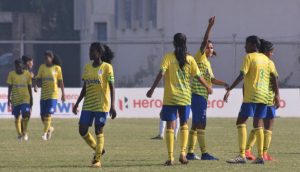 Panjim Footballers posted their first win of the 2018-19 Indian Women’s League season, as they pipped FC Alakhpura 2-1 in a tight affair at the Guru Nanak Stadium in Ludhiana on Thursday.

Karishma Shirvoikar broke the Alakhpura FC defence twice to help Panjim Footballers earn the three points, but it was the tactical defence of Scindia Saudatikar that stole the show and earned the defender the Player of the Match Award.

It was a tight affair between two sides that seems to have had each other sized-up pretty well. However, it was Panjim Footballers, who broke the deadlock early on in the game.

Having taken the lead, Panjim Footballers were happy to sit back and let Alakhpura FC have the ball, while they concentrated on keeping their defensive shape intact.

Keeping their backline strong was a strategy that worked wonders for Panjim Footballers, who had conceded three in their previous match against Hans Women FC.

It took them a little over 10 minutes after the start of the second half to double the score. Again, it was an aerial ball played in behind the defence, as Karishma ran on to the ball and lobbed it over the keeper.

Alakhpura FC kept knocking on the door and Panjim Footballers finally budged from a set-piece, as the Haryana side’s India U-18 international Samiksha expertly nodded it in.