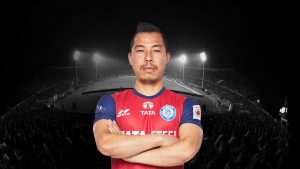 Robin has been an integral part of the squad over the last two season and has been one of the prolific right backs of the recently concluded league. He featured in 13 league matches and came on as a substitute during the second half of the quarterfinal clash in the Super Cup against FC Goa.

On signing with Jamshedpur FC, Robin added, “I am extremely happy to continue my journey with Jamshedpur FC. Jamshedpur has been my second home and I am really fond of the city and its people. It’s been an absolute honour to wear the badge of JFC for the last two seasons and I am looking forward to bringing a lot of joy to our fans.”

“The management has been very supportive, and I am looking to start afresh this season. The dream is to win the ISL with Jamshedpur FC.”

Jamshedpur FC CEO Mukul Choudhari added, “Robin has had an outstanding season with us, his dedication and commitment towards the team has set an example for everyone. I am happy he has decided to continue the journey which strengthens our defensive unit more. I wish him the best for the upcoming season.”