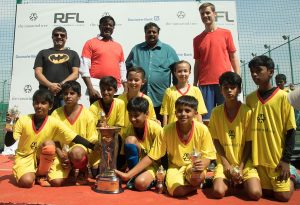 The eighth season of Roots Football League for youth footballers ended today, February 23 at the Turf Park, Koramangala in Bengaluru.

The Karnakata State Football Association (KSFA) general secretary Satyanarayan graced the occasion and gave away the prizes in the Under-12 age category.

The two month long weekend football league had around 220 youngsters in the age groups of 4-15, demonstrating their football skills in a competitive environment. Divided into four categories; Under-8, U-10, U-12 and U-15, each of the teams played a minimum of seven matches to be crowned as the champions of the league in their respective categories. A uniquely structured league format tournament, the Roots Football League was played out in a league and knockout format for the U-8 and U-15 age categories where playoffs were held on the final match day in accordance to the league standings. The U-12 and U-10 were round robin league formats with no playoffs. The league follows the small sided games philosophy to give more touches to players and hence, developing more skillful players. The matches vary between 4-A-Side, which is for U-8 age group and 7-A-Side and 5-A-Side for U-10 ,U-12 and U-15.

In the U-8 category, the finals was won by BLK Lions. They defeated PN Rao Hawks 3-1 in the finals

In the U-10 age category Stallions won all their matches in the league and finished first with 21 points.

In the U-12 age category Unitus Capital Cheetahs drew with Bisons 1-1 to finish on top of the table with 14 points after 7 rounds of league matches.

In the U-15 age category Unitus Capital Cheetahs beat Unibic Sharks 7-4 on aggregate after a two-leg final.