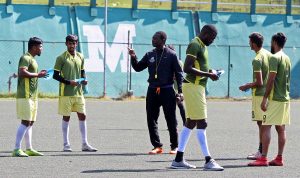 Mohammedan Sporting Club head coach Saheed Ramon has refused to buy into the favourites tag on his team’s head ahead of their Sikkim Governor’s Gold Cup final clash against Sikkim Himalayan FC on Tuesday at the Paljor Stadium in Gangtok.

The Nigerian tactician says the final will be a open contest despite exhibiting an output which has clearly put them above their opponents for the championship clash.

According to Sikkim Himalayan FC coach Pranay Subba, the Kolkata-based side is the favourite to win the ultimate at the knockout competition, but Ramon is not willing give ear to that assertion and insisted that Sikkim Himalayan FC have an equal chance of being crowned champions.

“We are not favourites. From a tactical point of view‚ the set up for both teams is almost similar. Both teams have the equal chance of winning the competition,” Ramon said.

Sikkim Himalayan FC, formerly known as Gangtok Himalayan, boosts a better head to head record over the Black Panthers. In-fact Mohammedan Sporting have never beaten Sikkim Himalayan FC at Paljor Stadium in Second Division League. However, Ramon is simply not interested to dwell in the past.

“I am aware that we are up against a very good side, with speed and able to create a lot of scoring chances. They are also going to be as determined as we are, so we have to play well,” said Ramon.

“Since this is a knockout tournament every game was like a final and it will be same against Sikkim Himalayan. We will put in our best to make sure we win. The team that is psychologically stronger might carry the day,” he conluded.