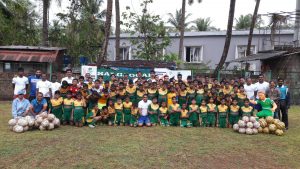 Goan giants Salgaocar FC successfully celebrated AFC Grassroots Day 2017 on Monday, May 15. Though rains lashed Goa through the night and in the morning, the young Green Brigade braced the rain and showed their love for the club and the passion for the sport by attending the celebrations.

Players from the grassroots as well as the Under-10 and Under-13 teams were present. Coaches from the Grassroots level and age group teams helped in making this event a grand success. The two and half hour session saw kids go through various stations which included ball control and juggling, passing, feel of the ball, dribbling and also 1v1 (Attacking). The players had a lot of fun in the rain during the course of the session. Parents of the participants also braced the rains and turned up to support their children during the fun-filled morning.